Eoraptor (pronounced EE-oh-RAP-tor) is one of the earliest known dinosaurs. It was a very small carnivore (meat-eater) that lived during the late Triassic period, about 228 million years ago. Recently, even older dinosaurs have been found in Madagascar.

ANATOMY Eoraptor was a small, lightly-built dinosaur that walked on two long legs. It was about 3 feet long (1 m); it had light, hollow bones, a long head with dozens of small, sharp teeth, and five fingers on its grasping hands (two of the fingers on each hand were very small). CLASSIFICATION Eoraptor was a saurischian ("lizard-hipped") dinosaur, a very primitive theropod, and a member of the infraorder Herrerasauria (which includes Herrerasaurus, Staurikosaurus, Saltopus, and other very early dinosaurs). The type species is Eoraptor lunensis (named by Paul Sereno, Forster, Rogers and Monetta in 1993).

DIET Eoraptor was a carnivore, a meat eater. It may also have been a scavenger.

LOCOMOTION Eoraptor walked on two legs and was a relatively fast runner. Dinosaur speeds are estimated using their morphology (characteristics like leg length and estimated body mass) and fossilized trackways.

DISCOVERY OF FOSSILS Eoraptor means "dawn thief." It was first found by Ricardo Martinez in 1991 in Argentina, South America, in the Ischigualasto Basin. This area was a river valley during the late Triassic period but is a dry, eroding desert badlands today. Eoraptor was found in the same rock formation that yielded Herrerasaurus, another very early theropod. Three specimens have been found, all in the Ischigualasto Basin. Eoraptor was named by paleontologists P. Sereno, Forster, Rogers, and Monetta in 1993. 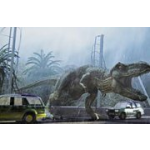